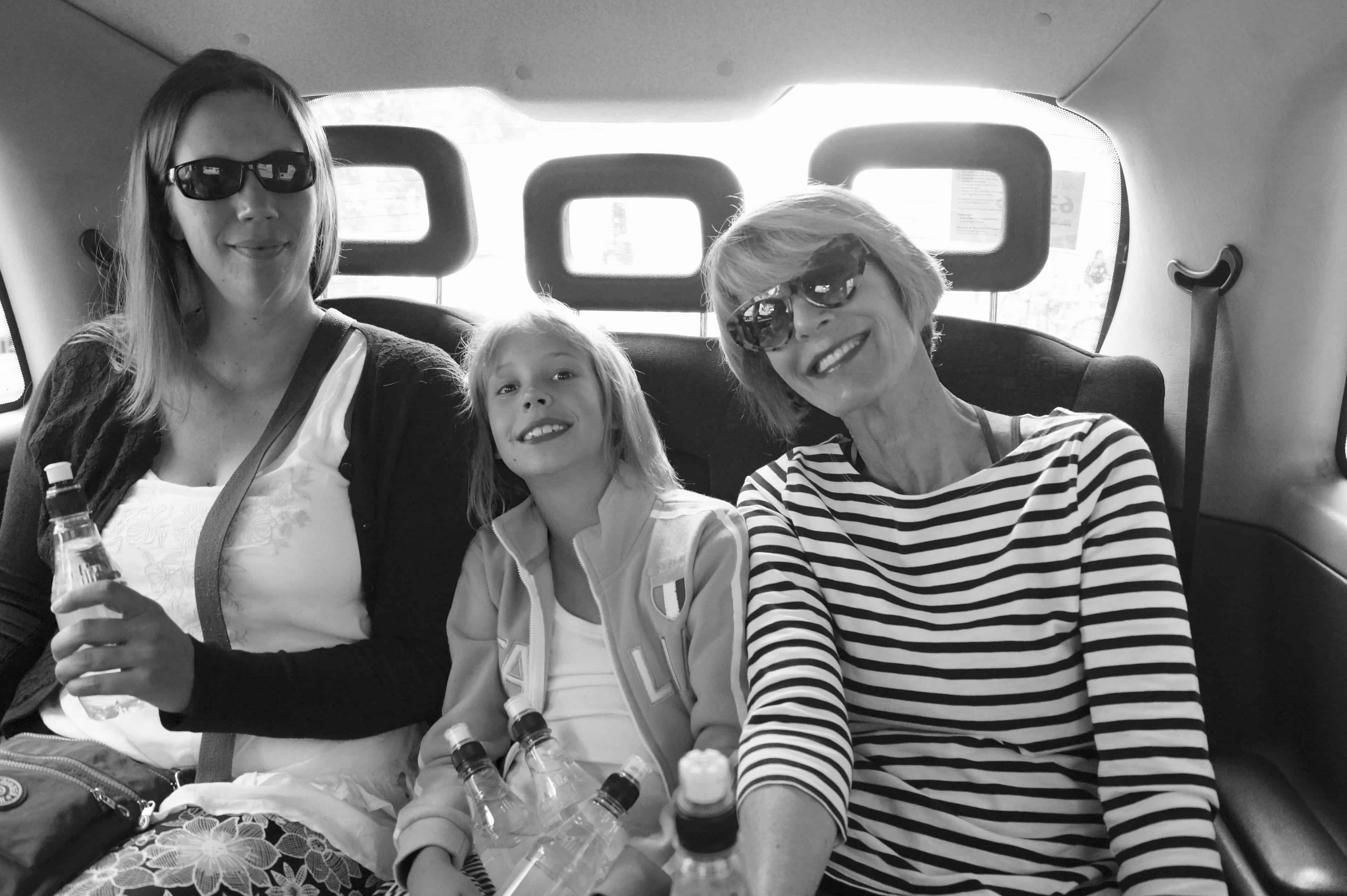 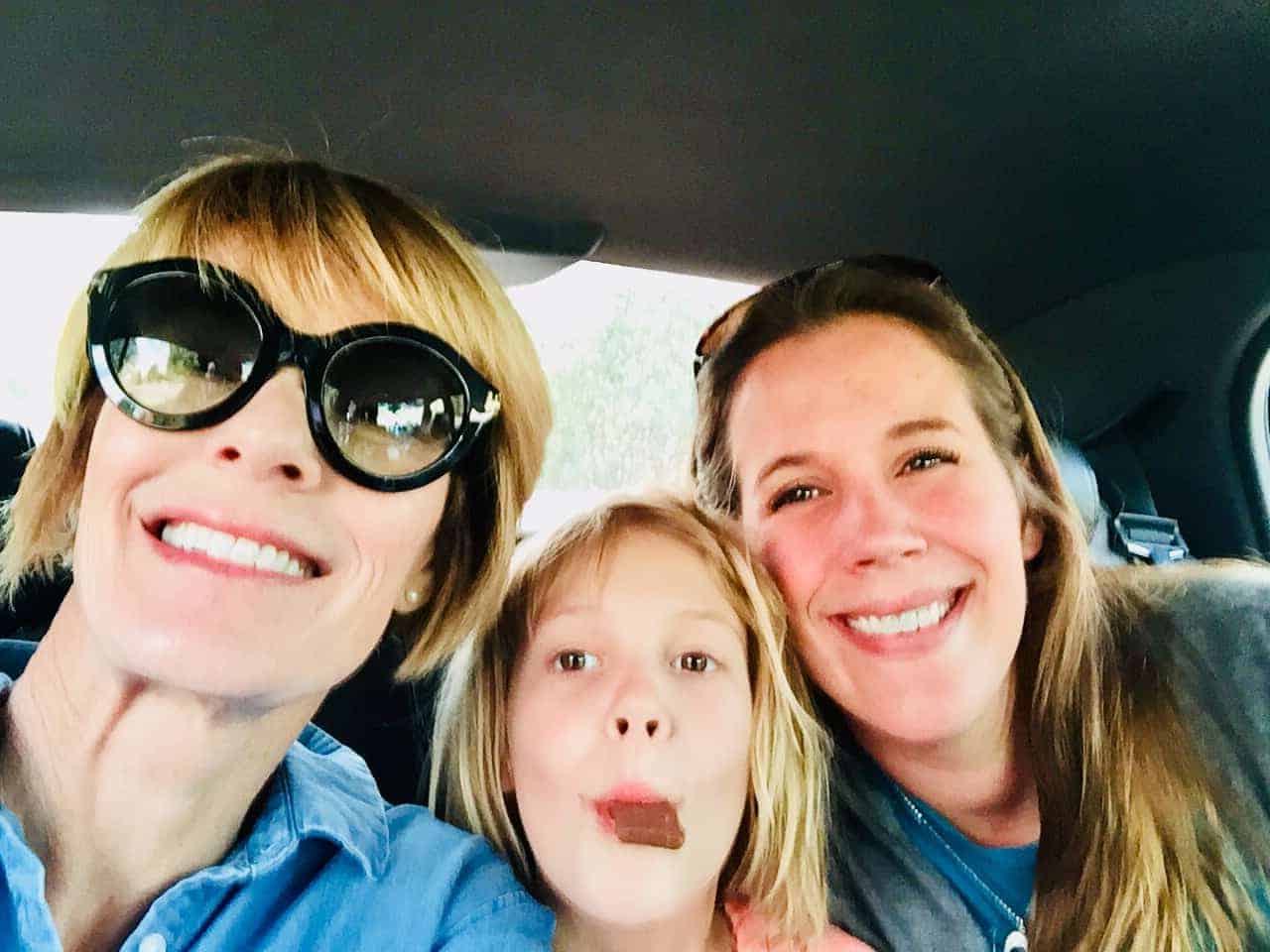 This year, we thought we’d give Missy K (and her Posse) an “experiential” gift.  We chose a month in Europe!  With the men leaving first for a brief stint in Rome.  Said, our driver, picked us up and whisked us off to the airport.  Of course, Missy K manages to talk Said (he’s known her since she was 2 and has a daughter just 4 months older than Missy K) into a large chocolate bar (which we all “wore” to the airport) for the ride.

The excitement level in the car was at an all-time high and poor Said was super patient with the  non-stop chatter.  He didn’t even flinch at the fact that there were teetering suitcases veering his way from the passenger seat in front.  If ever you need someone fabulous and dependable to drive you in Denver you can call him here: 303/719-3466. 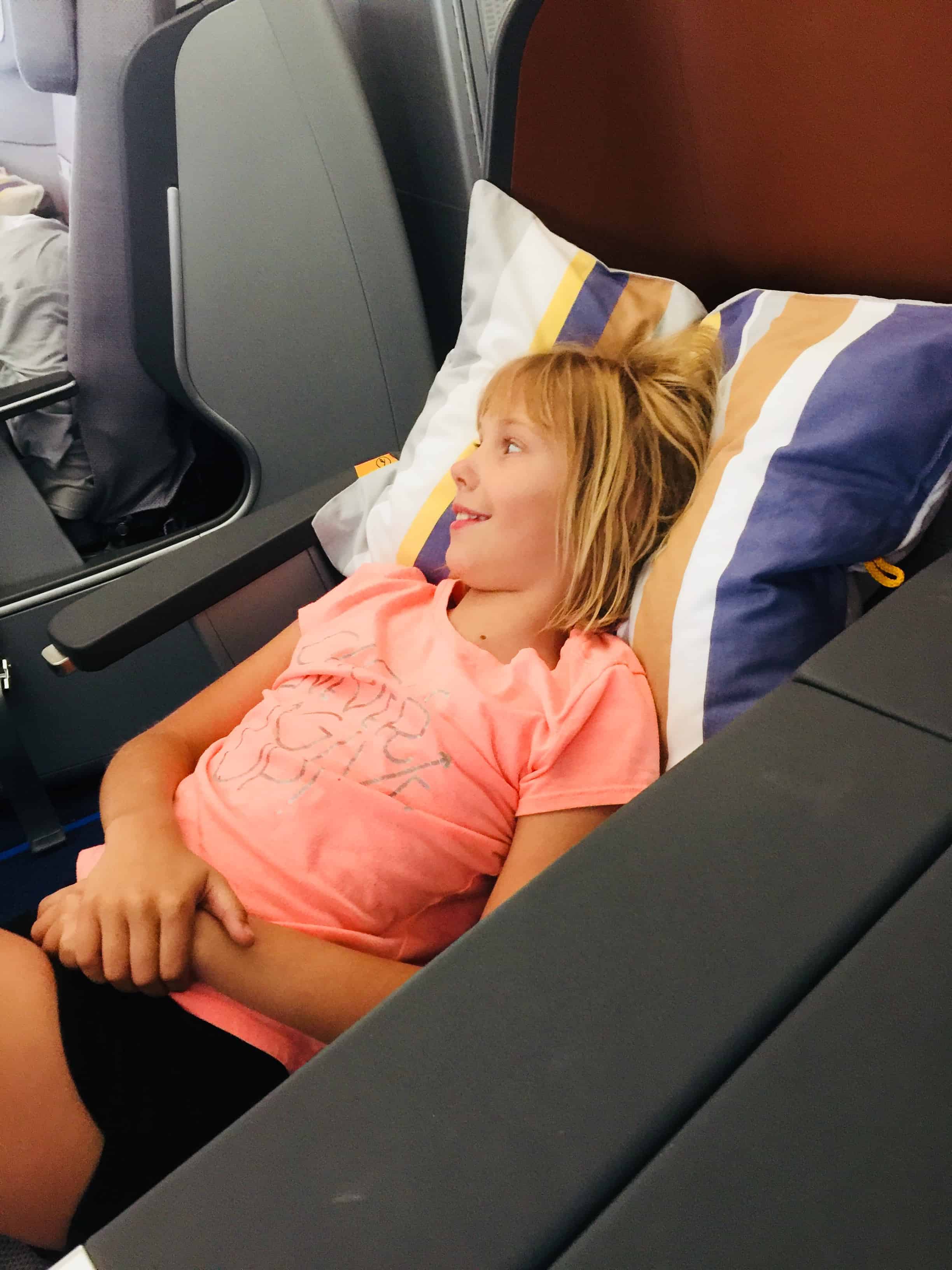 Missy K was SO excited about her lie-flat pod that she spent the first 30 minutes adjusting and re-adjusting her seat and settings…….wait for it……she played with it so much that both of our seats ceased to function and the on-board IT guy had to come and repair them (think German – disciplined, exacting, professional).  We were told this had NEVER happened before!  The plane was only months old!!!!  Maybe they should just keep our group on retainer and let us test the new planes??!!!!! 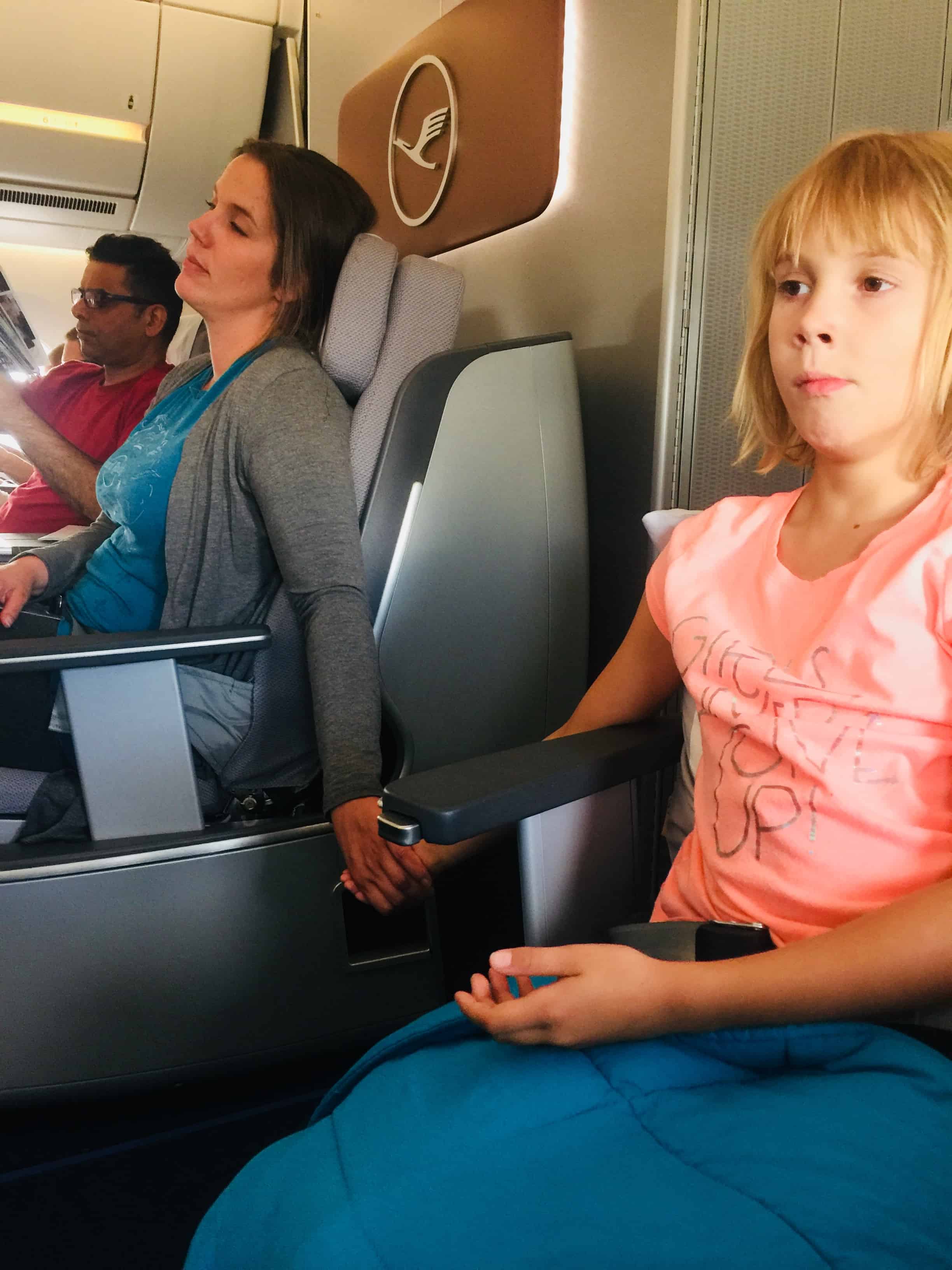 Okay, finally ready for takeoff.  Kendall flies well and loves the takeoff …..not so much for Momma.  She took her “comforting” responsibilities VERY seriously and reached over to hold Momma’s hand for the takeoff.  Kendall had also shared with her mother that “Nana says there is NO whining or fussing while traveling…..” in the terminal…….a lot of “sass” in that little body! 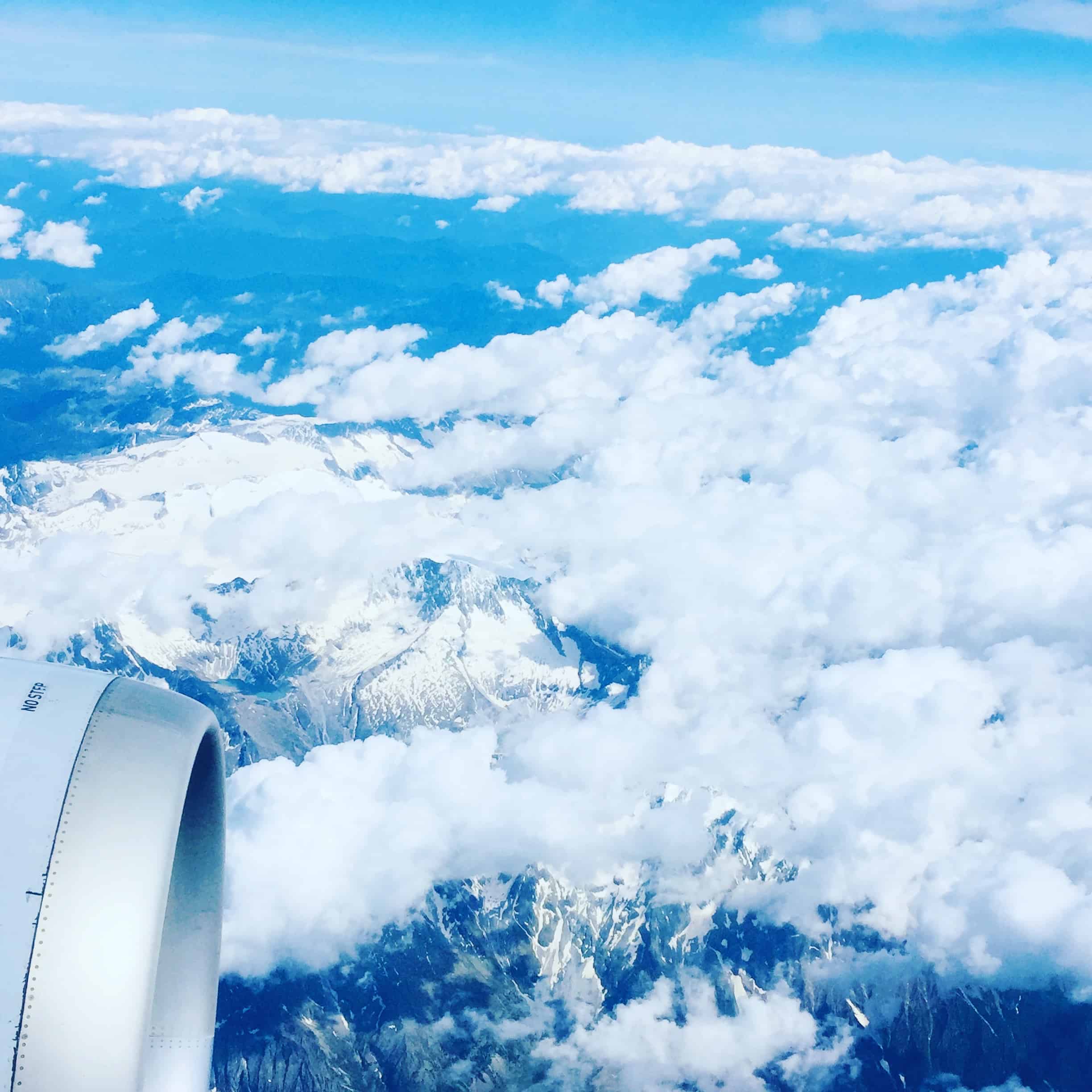 A shot of the Italian Alps.  I took this time to get in my 100 Summer Squat Challenge (okay, I was really working off the in-flight meal and Hot Fudge Sundae cart goodies I had eaten).  We try to use flight time to lie down and sleep so we are race-ready for landing.

Our flight took us to Munich, Germany….brief layover, then off to Milan.  We took an evening in Milan with just the girls to rest, order room service and spa.  On to Milan Central to catch a train to Florence where we join the guys! 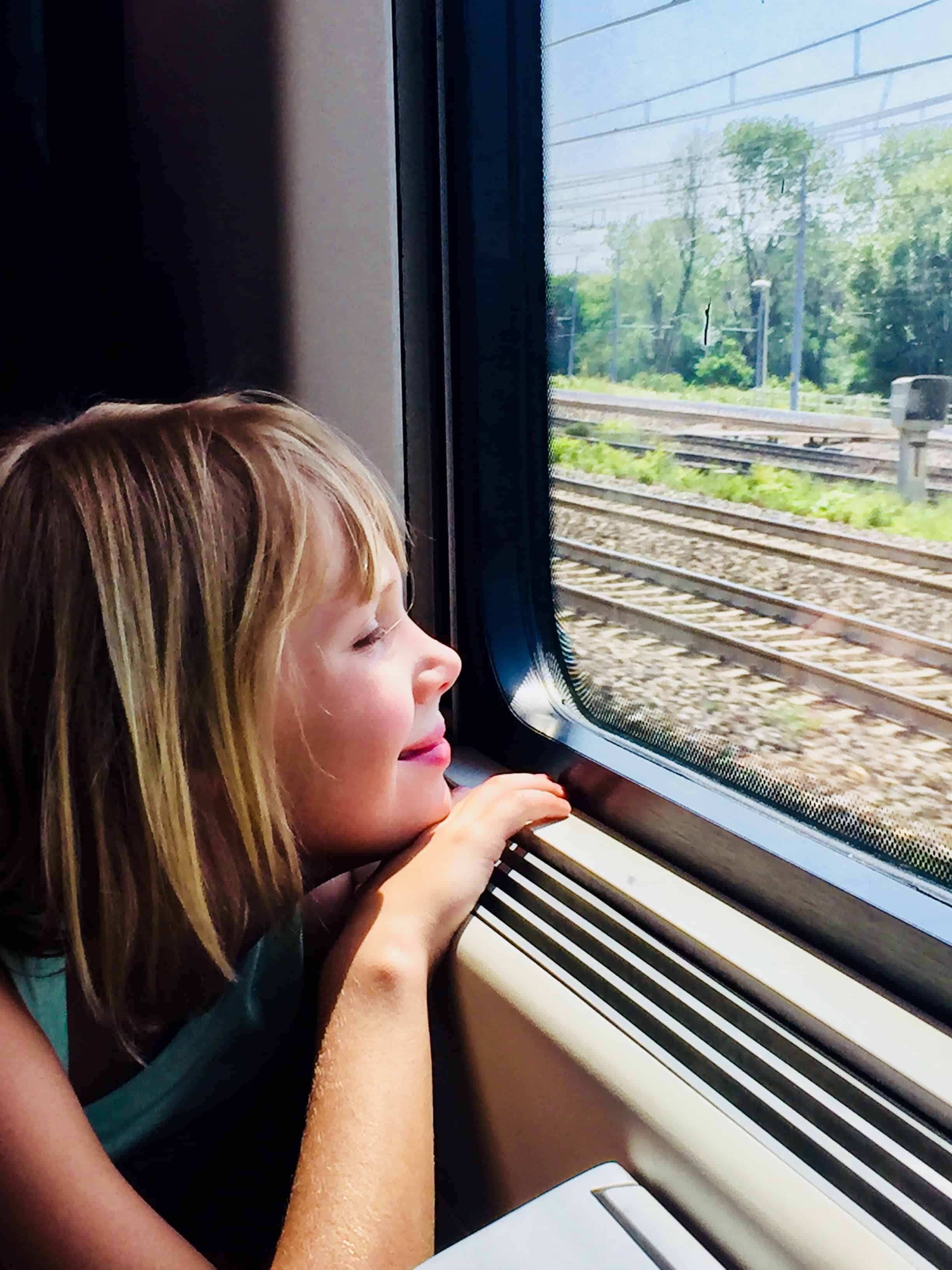 We boarded our train the next morning for Florence to meet the guys.  Kendall loved the train!  We could barely scrape her off of the window…. 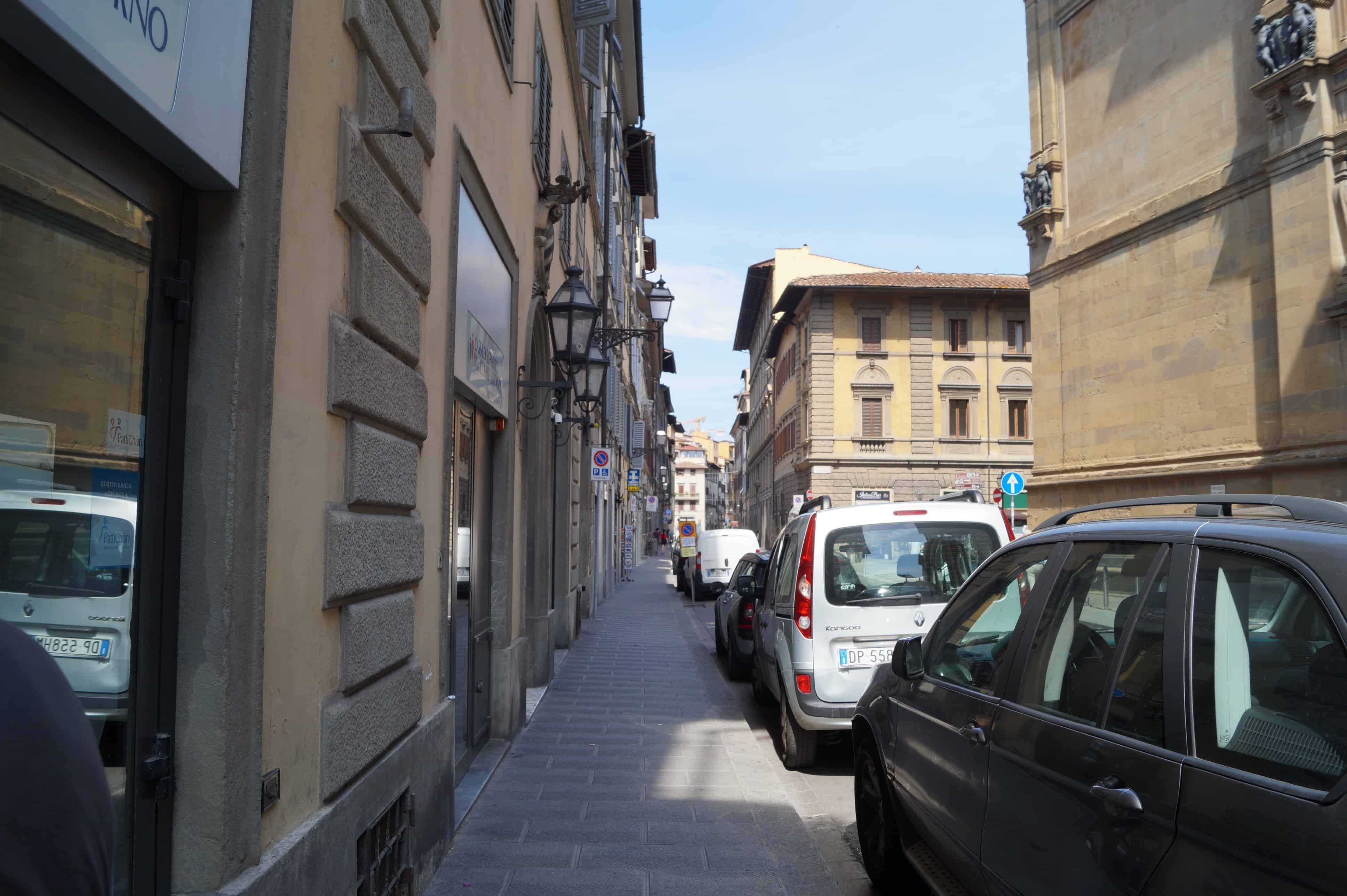 Here is our street in Florence.  We are trying out VRBO and, have rented a 4 bdr/4 bathroom apartment in the city.  This particular property is spacious and has been in the owner’s family for years.  One thing to keep in mind…..these are old buildings with “creative” construction/renovation aspects.  Be sure to ask lots of questions about things that will be important to you when booking these properties.

The architectural details are stunning……I loved the shuttered windows (screenless) that allowed us to open the windows (floor to ceiling) and watch people on the street below. 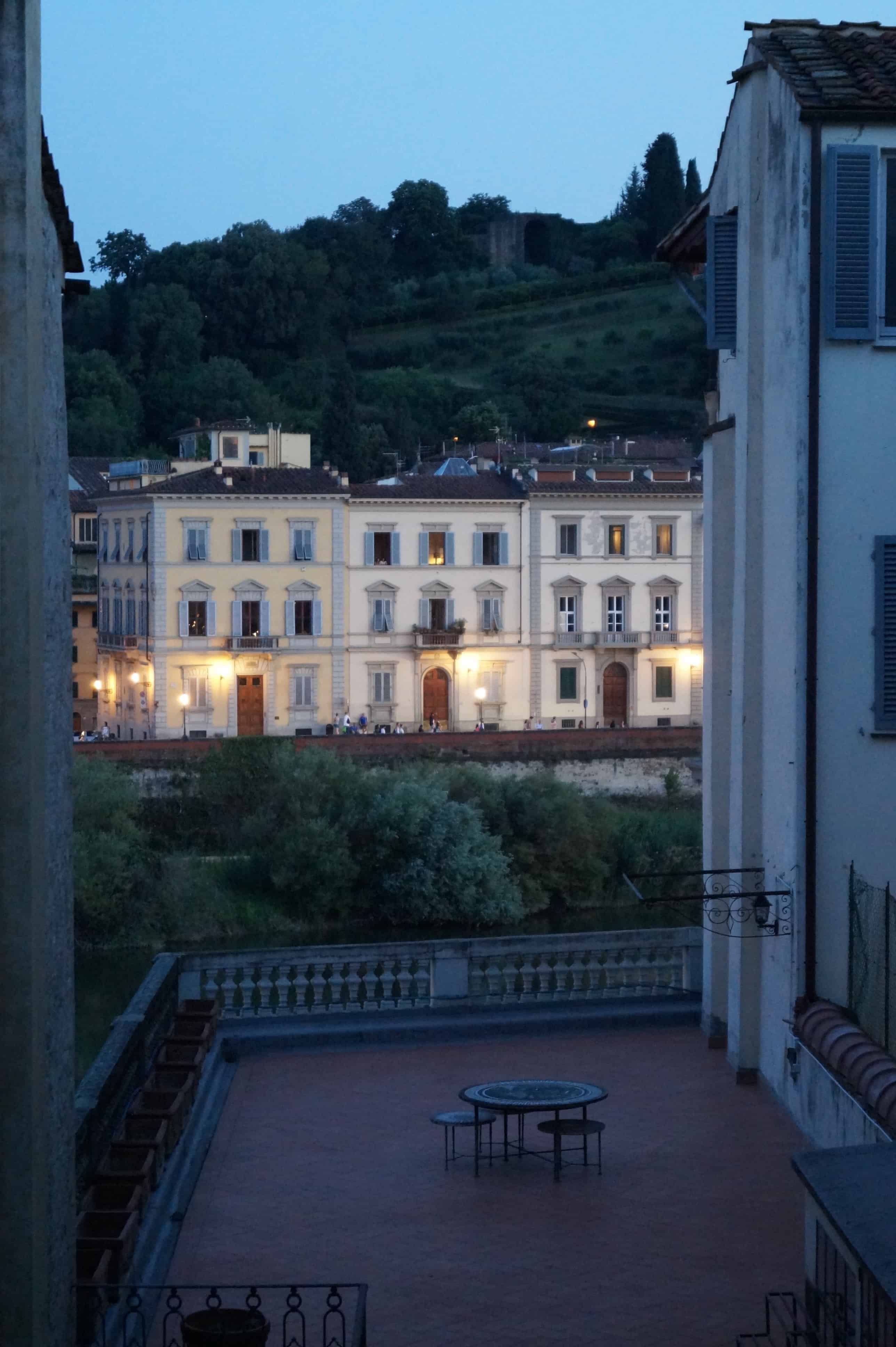 This is our little patio area.  A great deal of Italian Wine was consumed watching the boats go by here…….

One of the most famous spots in Florence is the Cathedral d. Santa Maria del Fiore in the Piazza del Duomo.  This complex features both Giotto’s Bell Tower and the Baptistry of San Giovanni. 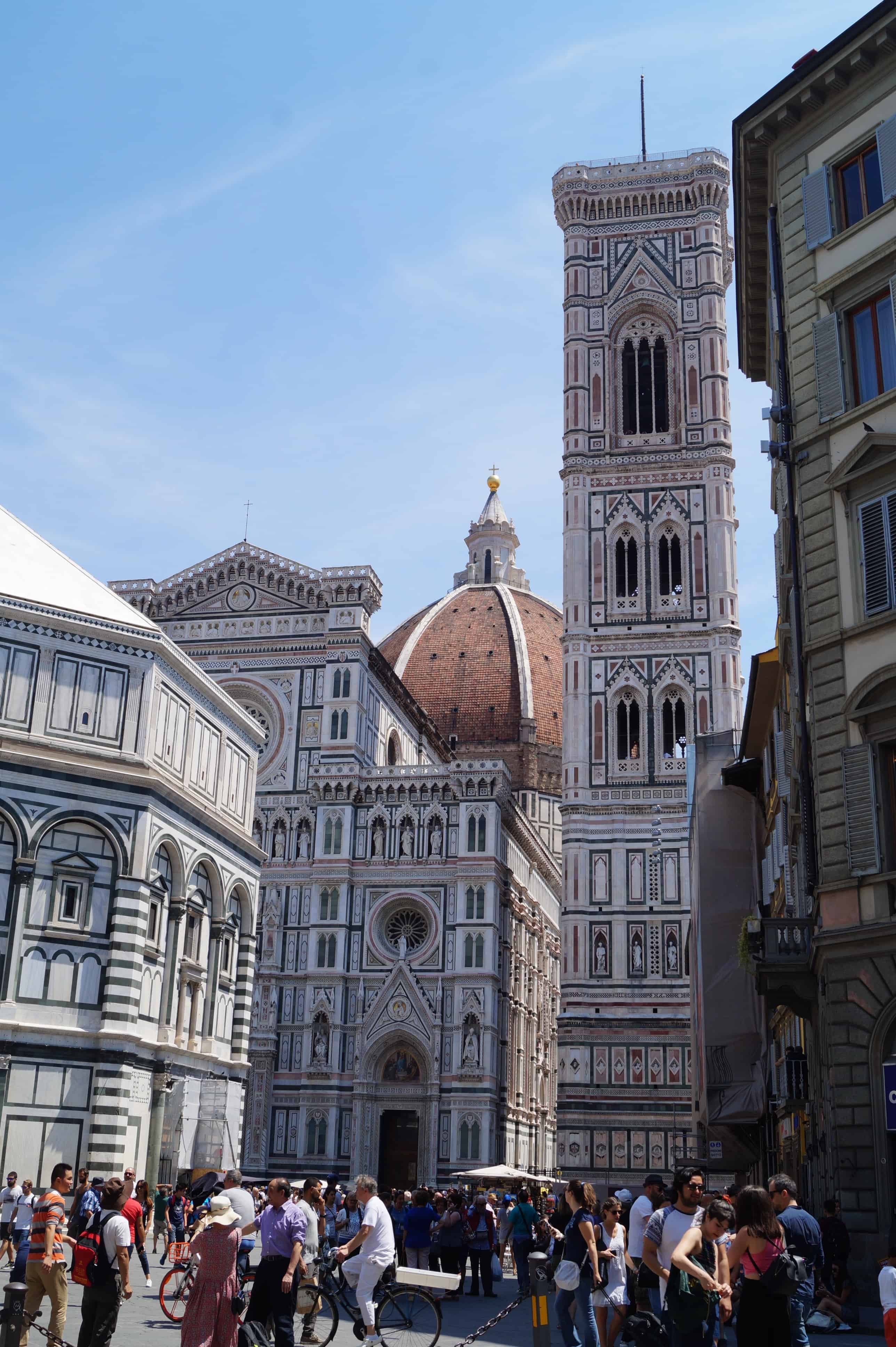 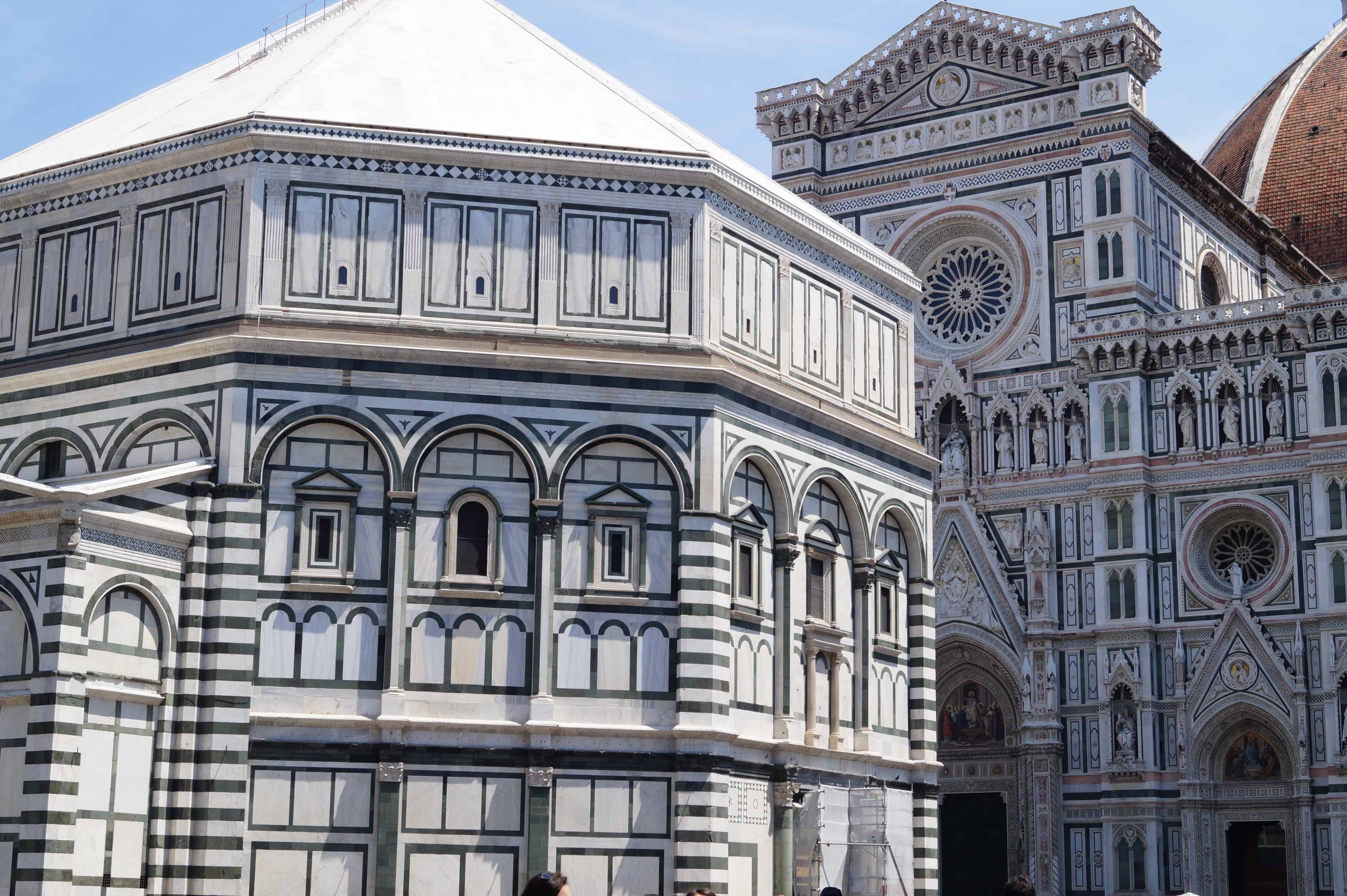 It’s hard to capture the intricate detail of these buildings….green and white marble form “stripes” on the structures.  Everything was hand-carved.

There is so much to see and learn about here…..but, we were traveling with kids, so we must keep moving (it seems the freakish hot wave of weather was everywhere….it was 98 degrees during most of our visit).  We decided on Segways to complete our tour. 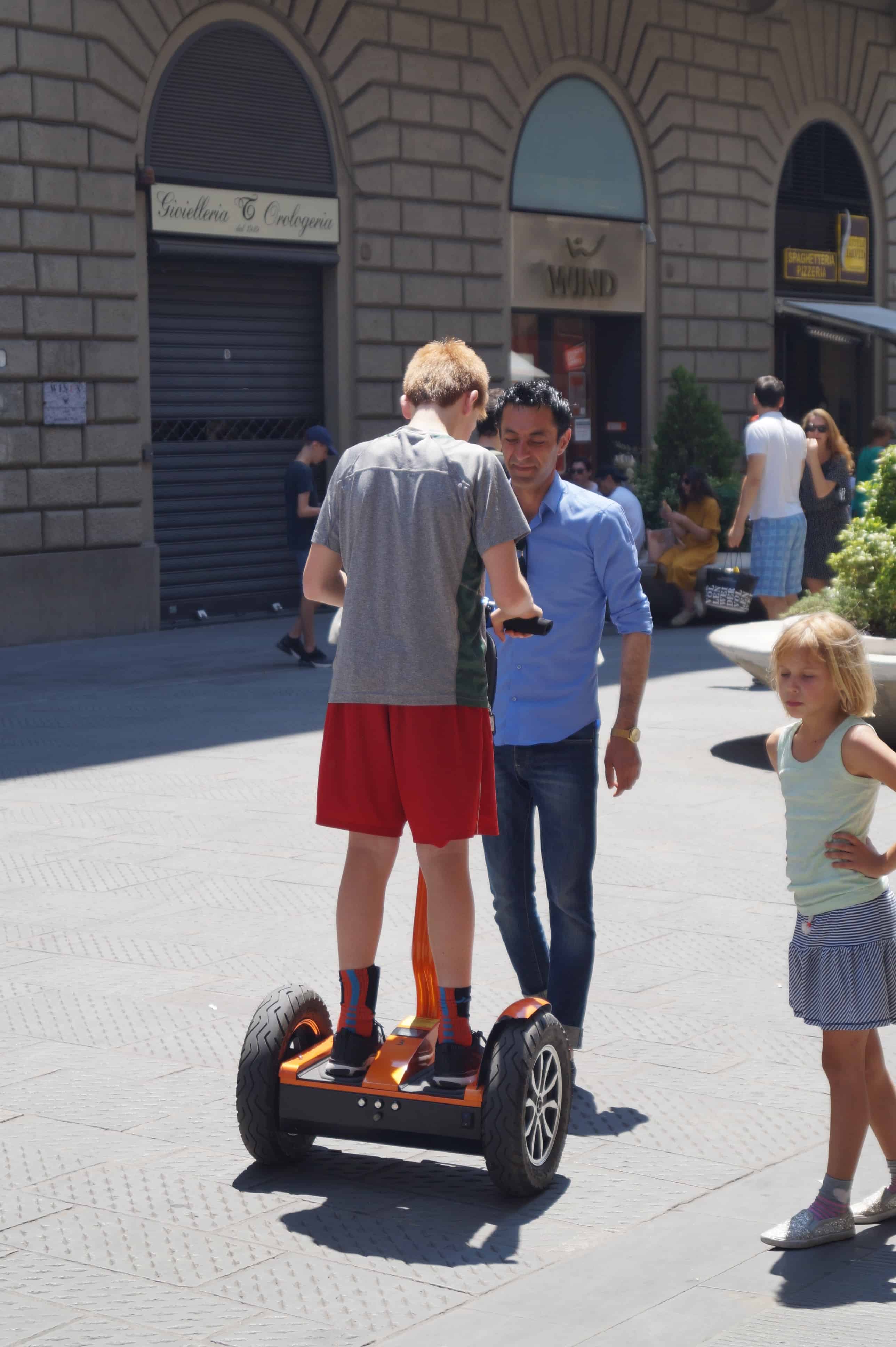 Missy K was a bit impatient….after 10 seconds of instruction she was ready to go!!!

What a super fun way to see the city.  Whizzing down narrow alleys….here are some more pics from our run in the streets of Florence. 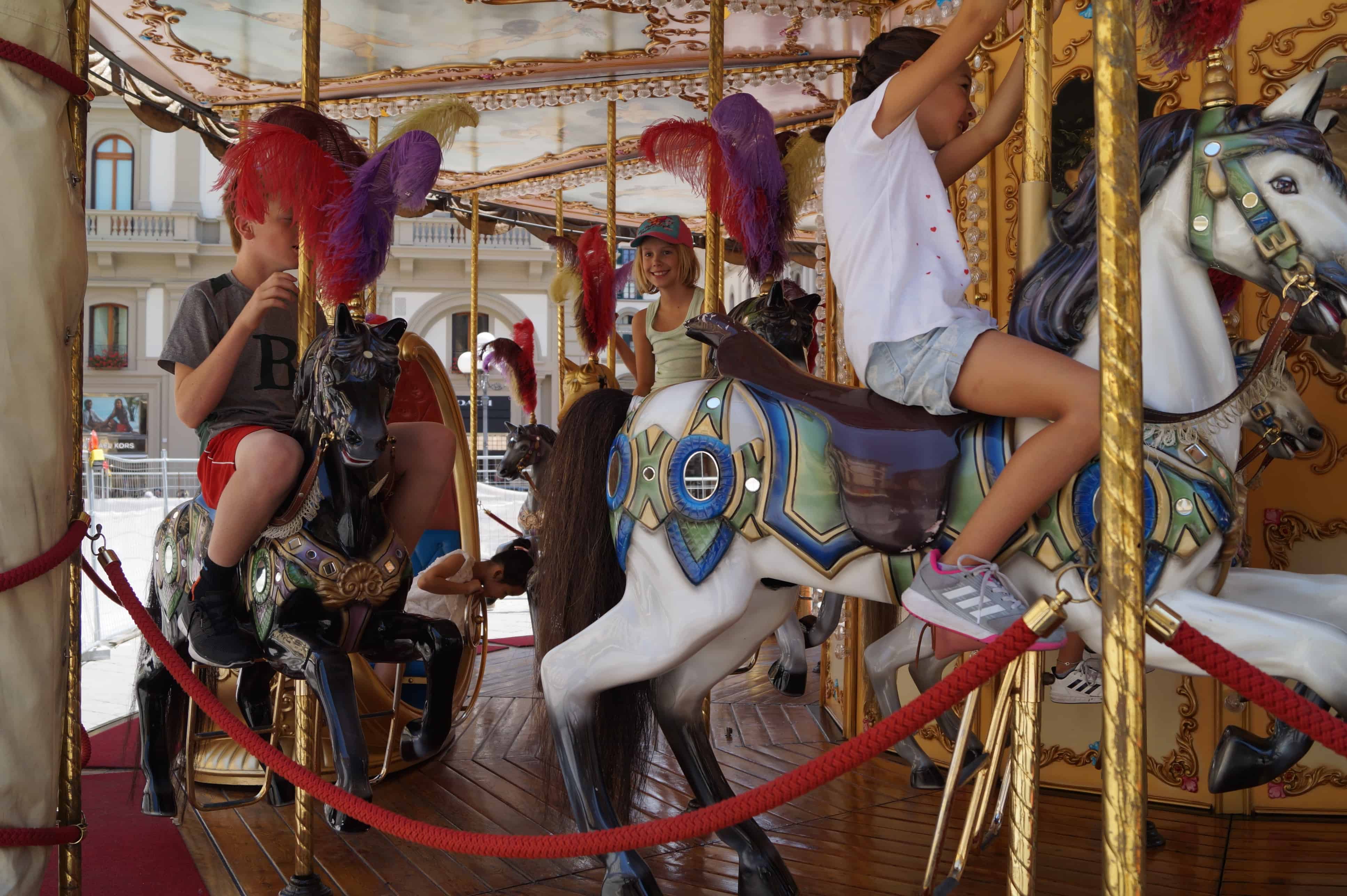 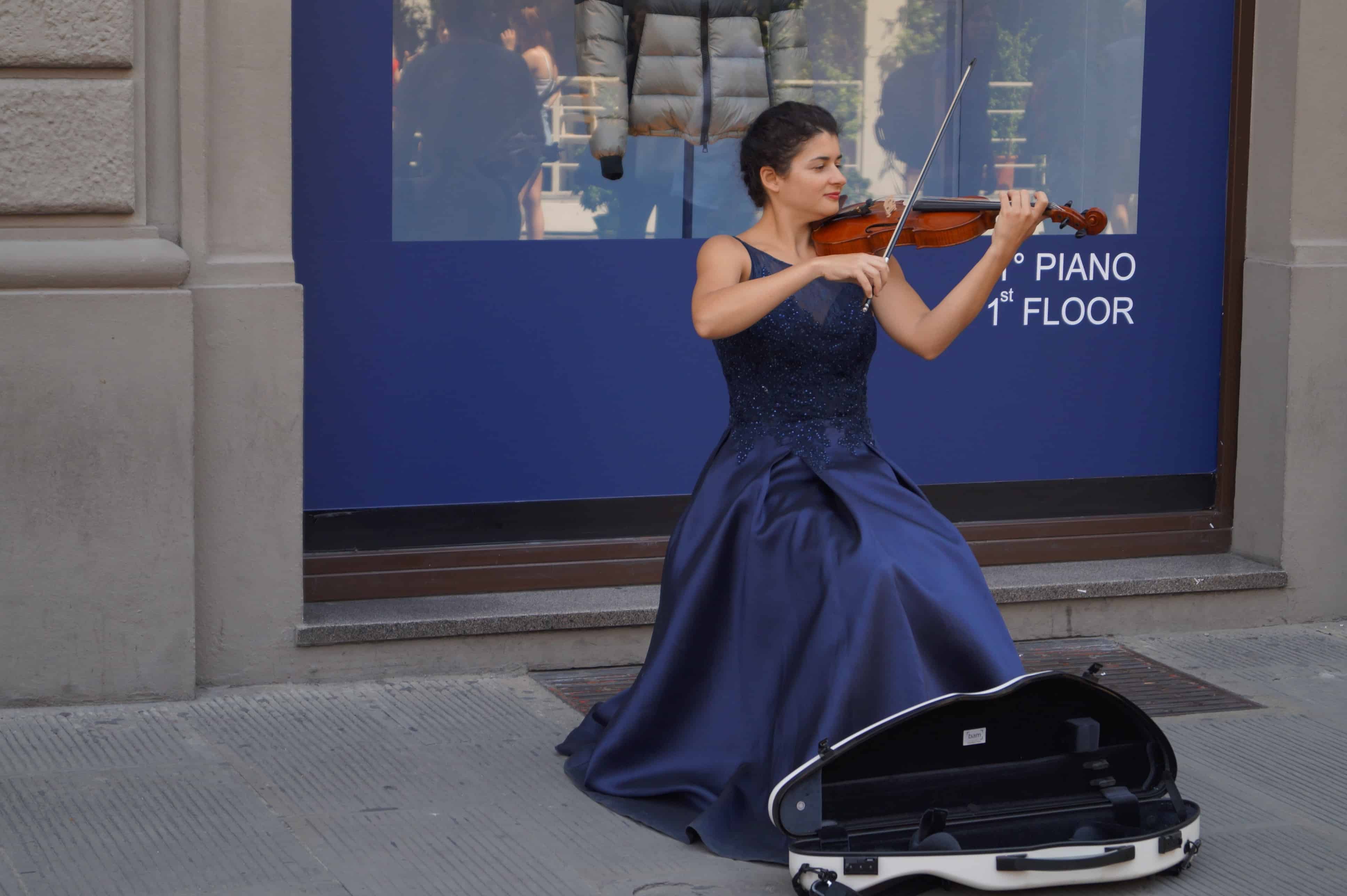 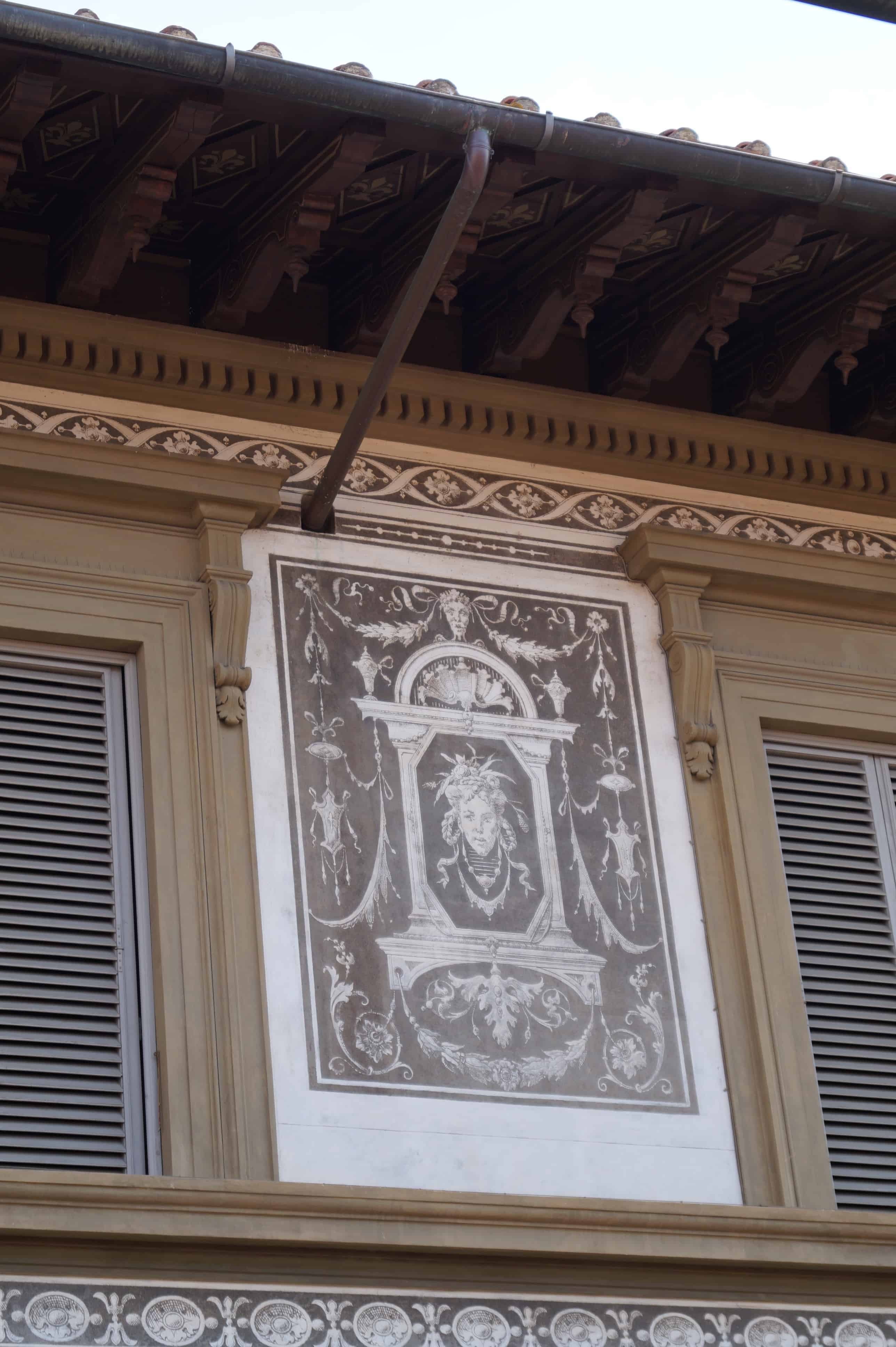 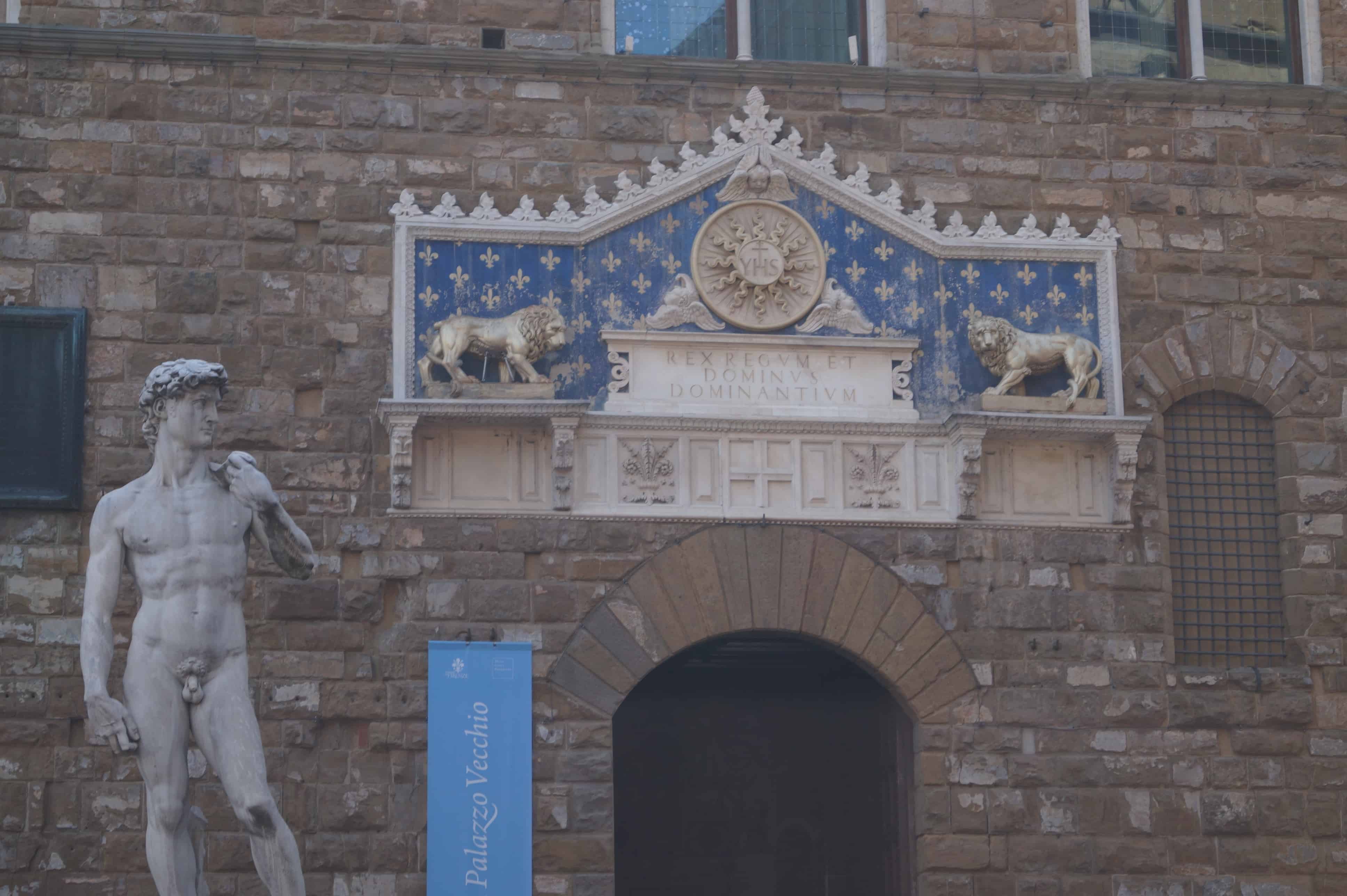 This is an exact copy of The David in front of the Uffizi Museum.  Missy K was a bit unnerved by the nudity and felt compelled to shout out “privates showing” whenever a nude statue appeared.  As you know, this happens quite a bit here:)

Off to Ponte Vecchio…….

Have you been to Florence?  What was your favorite spot/museum?  How long did you stay?

Who doesn’t like to celebrate??! But if you are

Your eyes are great receptors for morning sunshine

Almost two months into my Best Life Challenge with

Did you guess correctly? Research indicates that

Last year (aka before Crazy-Time) we took a trip t

Ever have a Cocktail that was soooo yummy and lig

Name the only butterfly that is NOT social. Spoil